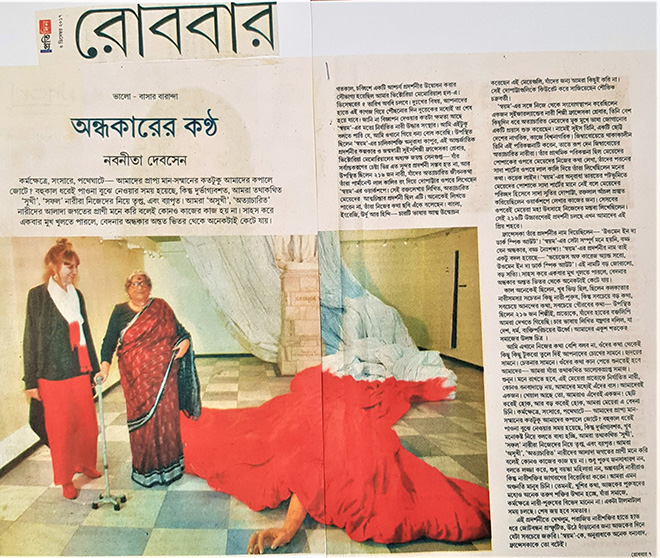 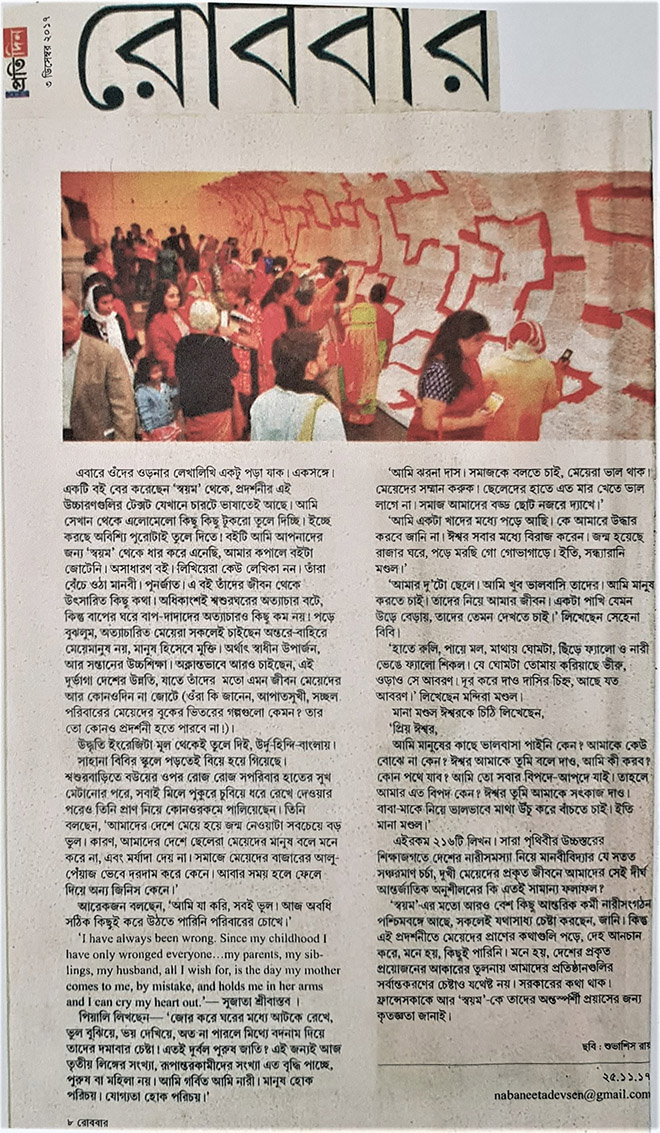 Voices in the Dark

At work, at home or on the streets – where is it that we ever get the dignity we are entitled to? For quite some time now, the time to clear these dues has been upon us, but unfortunately, those of us who like to think we are ‘happy’, ‘successful’ have been all too satisfied, too engaged with ourselves. We consider the ‘unhappy’ women who have survived violence in their lives to be different from us, so we hardly make any progress. Only if we had the courage to speak out, half of the pain of darkness in our hearts would be gone.

I had the good fortune of inaugurating an exhibition yesterday. It will be on display until the 5th of December. The sad part is that by the time this newspaper reaches you all, there will only be a few days left until the exhibition is over. I would not know how far and wide an independent advertisement by ‘Swayam’ can reach. I can only speak for myself, and I feel thankful to be able to have witnessed the exhibition. Also present was the driving force behind the project, Swayam’s Anuradha Kapoor, the artist Franziska Greber, the woman who conceptualized and conceived the project, and Mr. Jayanta Sengupta, head of Victoria Memorial, without whom the project would never have been actualized, and finally the 216 women who wrote the stories of their oppressed lives with red permanent markers on white dupattas in Swayam’s workshops. This was an exhibition of all those internal monologues written in blood-red, monologues of women who have faced violence in their lives. Many of whom do not know how to write, but have expressed themselves through pictures. These women, for whom we do hardly anything, have poured their selves out in four languages – English, Bangla, Hindi and Urdu. These dupattas were then put up by Saumik Chakraborty.

Franziska Greber, a Swiss woman, who has been on a long term endeavour to give back voices to the unvoiced survivors of violence, approached Swayam for this art project. Though one does call her Swiss, in truth, she is the citizen of a very small nation; it is in her work that she is truly international. She first designed this art project, while in Zimbabwe where it was brought to life by Zimbabwe women who have survived violence. Her initial plan was to was, to get women to write on the very clothes that they wear, and so these women wrote on white shirts with red ink. A few lines. For the Indian context, Swayam’s Anuradha Kapoor felt white shirts would be irrelevant and so she prepared white cotton dupattas with blood red borders which were then used in their workshops for women to write on. And on these, the women wrote their own narratives with fervor. All of these 216 pronouncements are now being exhibited in my dear city Kolkata.

Franziska had originally christened her art project Women in the Dark Speak out. But Swayam felt it was incomplete, besides the name seemed to have a little too much darkness, a little too much silence in it! And so this exhibition was renamed as Voices of Courage and Sorrow- Women in the Dark Speak Out – a very cogent, very real name indeed. Only if we had the courage to speak out, half of the pain of darkness inside our hearts would be gone.

It was very crowded yesterday, there were a lot of people, people who are aware of women’s rights issues, but most importantly, the real joy and glory came from the fact that each one of the 216 artists, whose blood-letters we had gone to see were present. Documents of pain, jotted in four languages, with words that rise above and beyond the boundaries of nation, religion or individual identity. A picture of our twenty first century society stripped bare naked.

I am not going to speak too much here, but I will leave some excerpts of what the women had to say for you; right in front of your eyes, your hearts, your entire consciousness’s. And those of us who make up the so-called enlightened society we must lend them our ears. Hear them. And remember, that they are all survivors of violence, survivors who live not in some remote jungle but right here amongst us. They are one of us. Do you understand, we are one of them! As women we recognize this pain, some more than others. At work, at home or on the streets – where is it that we ever get the dignity we are entitled to? For quite some time now, the time to clear these dues has been upon us, but unfortunately, those of us who like to think we are ‘happy’, ‘successful’ have been all too satisfied, too engaged with ourselves. We consider the ‘unhappy’ women who have survived violence in their lives to be different from us, so we hardly make any progress. It gives me great shame to say that it is not only the general male public, or older females, even young women stand in the way of female empowerment. Each one of us knows countless people like that. On the other side, it gives me great joy to say that among today’s men there is a rise in the power of youth who refuse to accept gender divisions in the workplace and in society at large. This is a time of great turmoil. And equality will have the last victory!

This exhibition very clearly brings out the united strength of women who have been defeated once, a strength that is very crucial if we are to turn today’s times around. I thank Swayam, Anuradha Kapoor, and definitely Franziska Greber.

Now let us read what they wrote on the dupattas. Together, Swayam and Franziska have published a book which contains their pronouncements in all four languages. Here are some excerpts selected at random. My heart wants to put the entire thing up though. I have borrowed it from Swayam for all of you because I did not have the fortune to have a copy for myself. What a great book. None of those who have written are writers. They are all women who have survived. Women who have been reborn. This book is a compilation of their life stories. The majority of which speak of torture in the marital homes, but that is not to say that instances of violence in the natal family are too few! As I read the book I understand, most of these women want to be free, not free women but free human beings, inside out. That is, the freedom to earn, and higher education for their children. And they keep on wanting untiringly, they want the progress of this nation, so that no other woman has to live the life they have lived.  (But do they know the stories inside the hearts of women from apparently happy well-to-do houses? Those stories can never be exhibited!)

Let me directly quote from the English texts.
Shahana Bibi was married off while she was still at school. She used to be beaten up by her in-laws day-in and day-out, and after they finally threw her into a pond, she ran away with her life. She says “It is a misfortune to be born a girl in our country because girls do not get any respect here… In our society, men buy women like vegetables are bought in the market and then throw us away when they’re done.”

Another woman writes, “I have always been wrong. Since my childhood I have only wronged everyone- my parents, my siblings, my husband. I only wish for the day when my mother will come to me, if only by mistake; and hold me in her arms. And then I will cry my heart out.” – Sujata Srivastava

Piyali writes, “The men in our society try to oppress us by locking us inside, deceiving us, threatening us and if nothing works, then by stigmatising us. Men are such weaklings! Nowadays, the number of third gendered persons is increasing by leaps and bounds, just for this reason… I am proud that I am a woman. We are human beings and that is our identity. Ability needs to define our individuality.”

“I am Jharna Das. I want to tell the world — let women be happy. Let women be made equals. We don’t like to get beaten up by men. Society looks down upon us.”

“I have two sons. I love them a lot. I want to raise them well. They are my life. I want to see them fly like birds in the sky – Sehena Bibi.”

“Bangles on your hands, and ornaments on your feet-Tear the covers on your heads, shatter those chains, shed those covers that make you afraid. Remove all those ornaments that stand for your days of slavery – Mandira Mondal.”

Mana Manal writes an open letter to God, “Why am I not loved by my fellow humans? Why does no one understand me? Dear God, please tell me what to do, which path to take. God, I stand by people in their hard times, then why am I so troubled? By your grace, may there be no more hardship. God, guide me towards an honest way of life, I want to live with my parents with my head held high.”

There are 216 such narratives.

Have the incessant and continual practices of women’s studies scholars worldwide failed to affect the sad reality of these women? I do know that there are several sincere women’s rights organisations like Swayam in West Bengal. But when I read what these women have written straight from their hearts, I can’t help but I feel restless, I keep thinking that we have failed. In comparison to the scale of these issues in our country, the efforts to make these organisations more well-rounded and holistic have fallen short. Let us not even talk about the government here.

I am sincerely grateful to Swayam and Franziska for this earnest endeavour.