To remember is a painful thing. But then again, I can’t help but remember the past. It looms like a huge shadow over me, and I can’t escape the memories of those past events I can’t bear to think upon; they crop up in my dreams sometimes.
My name is Meizi. I was born in Heilongjiang District, in the northern part of China. My father was an alcoholic, and I often witnessed him returning home inebriated and beating my mother. She couldn’t take it, and left home, but was found and led back by my father, who then beat her even harder for leaving. My younger brother dropped out of school because of it. My whole life was a nightmare.
A few years later, father passed away, and only then did we live in peace. At university I had a boyfriend who was also a male chauvinist, and didn’t let me draw, even decided when I would return home, what kind of friends I was allowed to make, forbade me from talking to other men. It was excruciating, so in the end I still left him, and threw myself into my studies
Now I live in Beijing, teaching at a university. Thinking back, I can hardly believe the past.
(Sleeves: If I were to live life over, I don’t want to be human.
My greatest wish is to leave, as early as I can.) 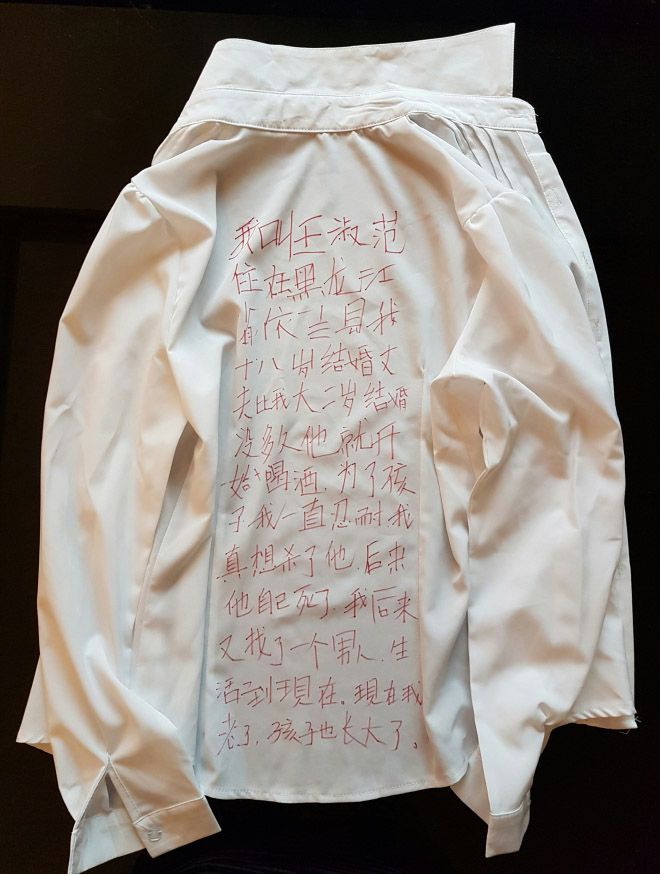 My name is Wang Shufan I live in Heilongjiang province Yilan district. I married at 18, my husband was two years older than me. Soon after we married he began drinking, for the kids I always endured it. I really wanted to kill him. Then he died himself. Later I found another man who lives to this day. Now that I am old, the kids have grown up.

I met my boyfriend at university. He also wanted to go to grad school, so I became a private tutor to support him, and he got into a grad school at a university in Beijing. I came to find him, but then he already had a new girlfriend. She and I have been pregnanted by him twice, but got an abortion both times because he said it wasn’t the time that he and I still had school, but my body has suffered greatly. Since then I have been suffering from depression. I don’t believe in love anymore and I became a prostitute.