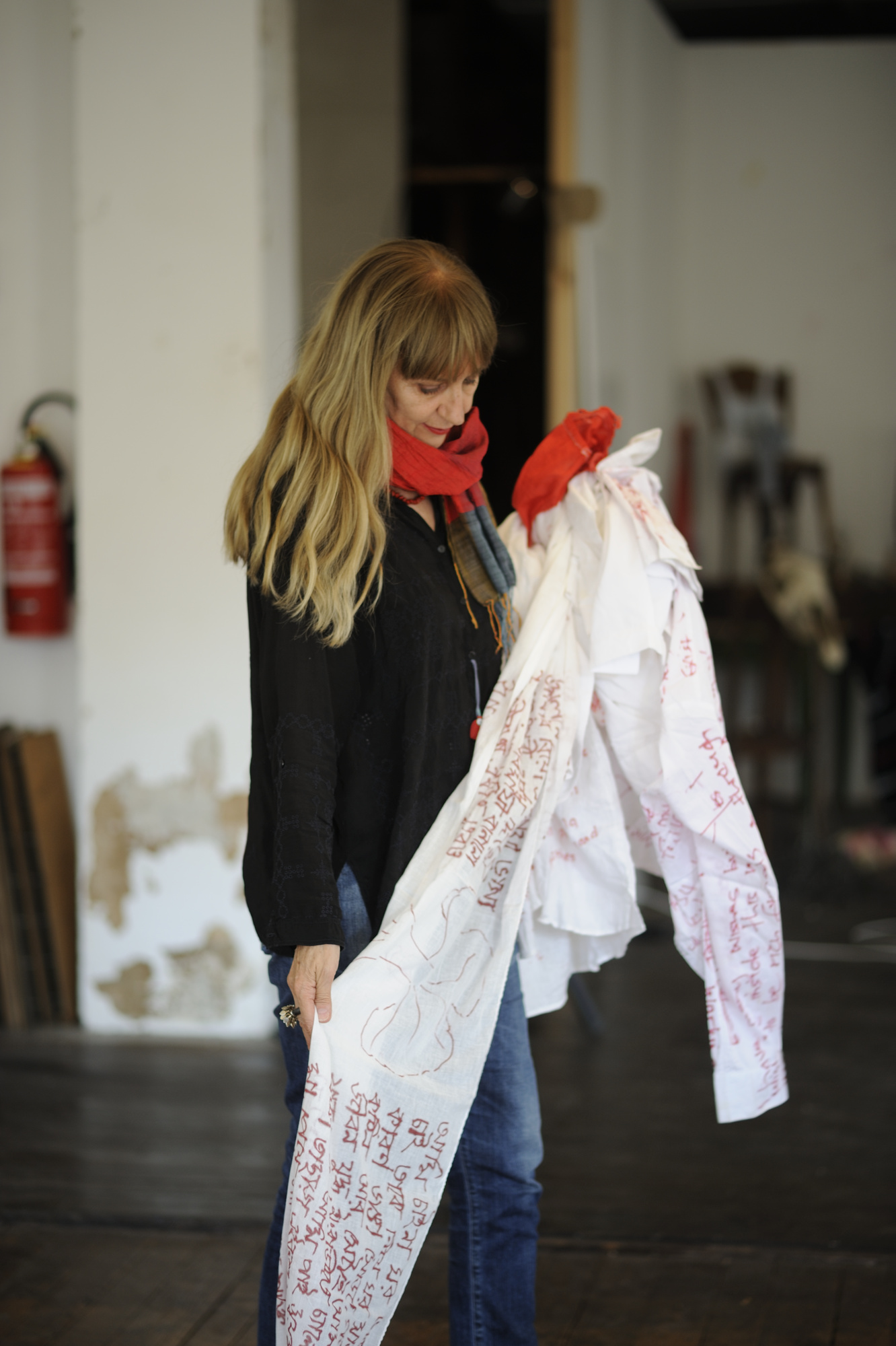 «I was raped» – a Zurich artist gives women worldwide a voice

Franziska Greber lets women in Zimbabwe, India and China write their messages on clothes with a red pencil. Now the project «Women in the dark» comes to Switzerland.

No. You do not write on a piece of clothing. This is not proper. Contrary to the norm—and even more so conventions are condemned when stark white cloth is treated with a red-colored water-proof, blood-thirsty pen. A piece of clothing, be it a blouse or a scarf, always has a clear function. It conceals. It defines. It protects, decorates and stresses. It arouses attention and orders. The female garment has always been under particularly keen observation.

And now Franziska Greber, an artist, psychotherapist, feminist, and former co-director of the Intervention Center against Domestic Violence in the Canton of Zurich, is now asking women to write onto white blouses or white scarves, what concerns them the most.

This “Women in the Dark” project started in Zimbabwe in 2016, spilled over to the Seychelles and Mauritius, continued in China and arrives in Switzerland this autumn and in India during the winter. The interim results are as follows: 600 written blouses, 200 written scarves, a highly respected, multi-faceted exhibition in Beijing and a planned installation in the majestic Victoria Memorial Hall of Kolkata, India, at the end of November.

OUT OF THE DARK

The idea behind “Women in the Dark” is simple, the effect overwhelming. One year ago, Greber was visiting friends who live in a township in Zimbabwe; but not in a place where many tourists would stay. The Swiss woman stood out. Yet it turned out that women from that neighborhood were very open to contact with this foreign woman and began to tell her about their lives.

As a therapist and a former co-head of a department, she has been accustomed for decades to hearing about the fate of women—stories that often are hard to digest. In the township, it was the same. Greber carried the stories around, and as she stood in a local market before a selection of white blouses, she suddenly realized: All these messages from women, which are normally hidden in the dark, belong to the public, in one artistic context.

On the market in Zimbabwe, Greber bought all the blouses, bought a red, permanent felt pen—within a few days the blouses were covered with stories. “I am married to a man twice as old as I am,” is one of the messages. Or “I was raped when I was fifteen years old” or “I was abused by the man whom I trusted.”

The artist, who lives along Lake Zurich in Waedenswil, Switzerland, does not give the women any guidelines. They write what they want to write and how they want to express themselves. Some are short messages, some are whole life stories. There are calls for help, demands made, hopes shared, accusations lodged as well as encouragement given to other women. Some of the writers even leave their names and telephone numbers, others decorate the garments with drawings. They write on the back of the blouse, others on the front and on the sleeves. There is no delete button, nothing is cut off. The garments remain intact and turn into the woman’s global voice.

Thus, a great mountain of works of art and messages arises, and the one is inextricably linked to the other.

The artist Franziska Greber collects what is given to her. At the exhibition in Beijing she received five written blouses under difficult, dangerous conditions—clandestine, such that they were tucked into a metro station. The force of silence and anxiety to express themselves was overwhelming in China.

Greber designed her China installation in a windowless cellar. There was a three-meter-high globe of 500 white, unwritten blouses that almost burst the narrow room. From the globe hung a red thread, like a blood vessel, down to the ground leading directly to the five written blouses.

“One day after the vernissage,” says Greber, “suddenly there was a sixth blouse lying on the floor with a text in black, deposited by an unknown author.” With the giant globe of blank white blouses, the Zurich artist intended to reflect the extent of silence in China compared to the small group of written blouses that seemed pitifully small.

For Kolkata, on the other hand, Greber has a very different idea to present the work of the women. In the pompous museum palace, the visitors will be able to stand and walk under a meter-high breaking wave of written scarves (Indian Dupattas). Contrary to China, according to Greber, the Indian women have begun to address the attacks on them and their mistreatment with great force and an unbridled anger: “The subject matter is rolling like a huge wave,” explains Greber.

Whether Greber is working with women in India, China, the Seychelles or Mauritius, she is always aware of how much the writers insist on their stories being finally revealed to and perceived by the world.

What turn the project will take in Switzerland, is still completely open. Two weeks ago, Greber presented and launched “Women in the Dark” in St. Gallen.

As always, Greber also works closely with organizations, with governmental authorities, with NGOs, but also with committed private professionals. It is important, says Greber, that the women, who often are expressing themselves for the first time in their lives through their participation in this project, are cared for, if necessary.

The artist is pursuing an enlightenment goal to first draw attention to the situation of women and, secondly, to empower them. “Women in the Dark” is about women’s rights and human rights, worldwide. 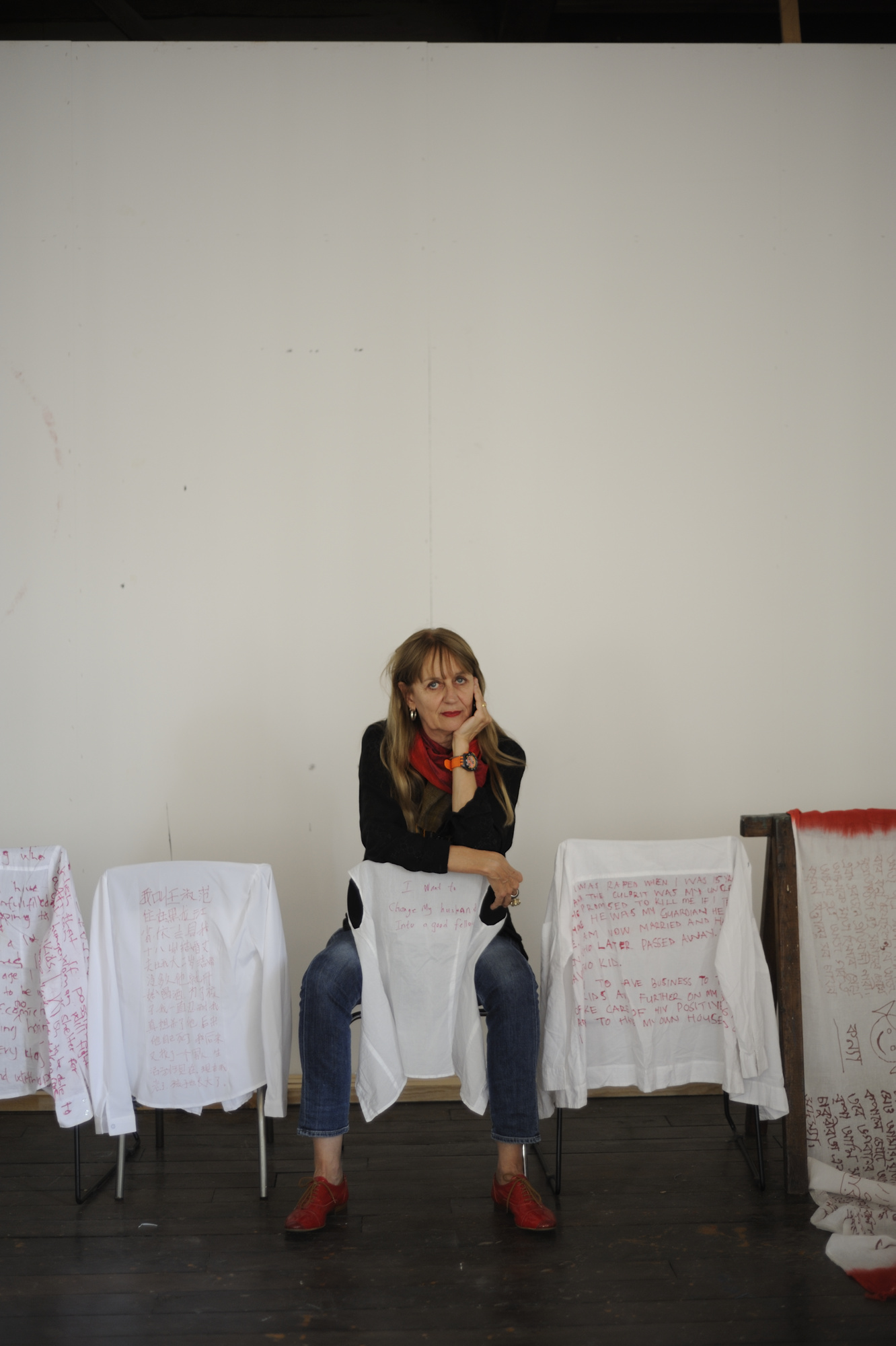 For Franziska Greber’s project, „Women in the Dark,“ women from all over the world write their own personal messages on white blouses or scarves. (Picture: Selina Haberland / NZZ)

Greber now awaits the reactions and messages from Switzerland. How will the local women express themselves? What burns in their souls? The blouses should be spread as widely as possible to all cantons and towns, to the old and the young, schools, hospitals, prisons and homes, to every population strata. The artist will collect what comes back, and then evaluate and shape it. In China it was the globe of silence, in India it will be the wave of protest—and in Switzerland? The first blouses are gone. The red, permanent felt-tip pens are ready for use and they call on women to express themselves.